Preamble: It is with great thanks to Gaía Passarelli a music journalist and TV presenter on MTV1 Brazil for the following article.

Last month (October 2012) she had the privilege of visiting the John Peel Centre for Creative Arts . The venue is currently undergoing extensive refurbishments and Gaía was the first (at the time) reporter to get inside the building for a guided tour, speaking directly with the project director. She also visited Peel Acres and spoke with Sheila Ravenscroft.

Below is the exclusive English language version of the article first published in Portuguese on the MTV1 website.

Last October 25th was another John Peel Day, the eighth since John Peel’s passing. It was a cold autumn day and the old Corn Exchange building of Stowmarket, in Suffolk, dated from 1835, is having its steel archers painted red. A bunch of hard workers and music enthusiasts is restoring the building, preparing future John Peel Centre for Creative Arts.

The venue is due to open next December, possibly right after Christmas, although Tom Barker, deputy director of the project won’t give out any detail. “We don’t want to put too much pressure on ourselves. There is possibly going to be a soft launch since we need to give ourselves time to train the volunteers who are going to run it.” A headliner band for the opening is not even being discussed right now, although, of course, there are many great options in sight when you think about it.

‘Many people would like to play at the opening, but we don’t want to rush things,’ Tom says. But he also remembers that not long ago Billy Bragg played Woody Guthrie songs at fund-raising night and bands with a close relationship to Peel’s career, such as The Fall and The Undertones who performed a fundraising gig in aid of the JPCCA.

Fundraising is essential for the project, but there are more sources: “Around ten major sponsors and then our own fundraising events and donations from public,” he explains. “Most of the money is coming from the National Lottery and from Biffa Awards, http://www.biffa-award.org who consider this their flagship project for the year. There are also the fundraising gigs, local charities, funds from green technology, donations from people and families.

The building itself is not very large, for around 250 people, with two floors and several windows allowing natural light. After the entrance there’s a small lounge, a very central stage surrounded by a bar, and a mezzanine. Tom points aspects such as solar panels on the roof and the window over the main entrance, painted by local youngsters.

It is not easy work, as Tom tells me, but the idea was very well received and there’s a community sense of participating in something that will put Stowmarket on the map. “As an organization we are all volunteers, nobody gets paid. There are around ten people on the management board with various degrees of involvement and roles. This is really taking a massive amount of work, it is an almost a one million pound refurbishment of the building.” 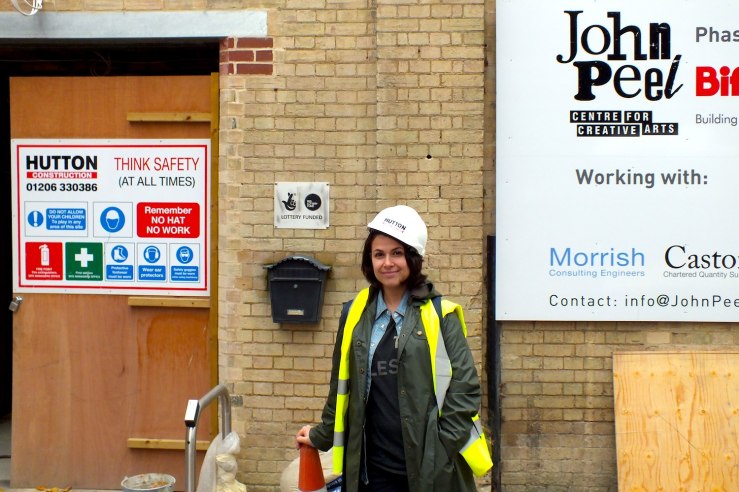 Peel was an integral part of Stowmarket daily life and everybody embraced the idea with enthusiasm. Tom is one of them – a rave veteran himself, a drum’n’bass fan.” It all goes back to John again, you know? He was responsible for Fabio and Grooverider getting the spot at Radio1 back then.”

As we know, Peel wasn’t massively popular among youngsters on his late life. Talking family life weekly in his Saturday morning show, Home Truths, made his name among “grandparents and parents and kids,” as Tom puts it, but today most kids are not aware of his impact in the British music culture, vaguely recognizing the name as someone their parents or older siblings admire. The Peel Center, then, is important to keep the name alive, as well as give proper homage to the great man.

“We must make it be a quick stop, really”, advises Tom. He is talking about our visit to the Peel Acres, the house where John Peel, Sheila Ravenscroft and their kids lived since the 70s. The place holds not only Peel’s gigantic record collection, with nearly 80.000 items, but also the studios where many of the Peel Sessions and many of Peel’s BBC shows where recorded.

Tom speaks about Sheila with loads of respect and honest admiration. “Without her support it would never happen, really. She is a very down to earth and hands on person.” Understanding that she is not to be upset about me showing up on such a day, I am prepared to make myself invisible. “Sheila really embraced the idea of the John Peel Center, but she didn’t want the venue just to bear John’s name.” It had to be more than that, to be a banner of the artistic commitment Peel had in life, he explains. Sheila became a patron of the idea, even serving beer at the bar when fund-raising events took place.

Peel Acres is located just about ten minutes from Stowmarket, a bright pink hamlet, impossibly British. Peel’s vinyl collection counts circa 65.000 items. Pots of tea, a wooden stove and a very energetic dog are the first things to notice. There are also five cats and, of course, countless records all around. And, not an iPod/iPhone/Pad in sight.

A bright and talkative character, Sheila offers tea and worries about the dog jumping on me. As she talks and laughs about presenting the Q Awards to Pulp last Monday night, it is clear that here is a woman who loves the music and the artists her husband championed through their life together, who stood gladly on the back scene the whole time. 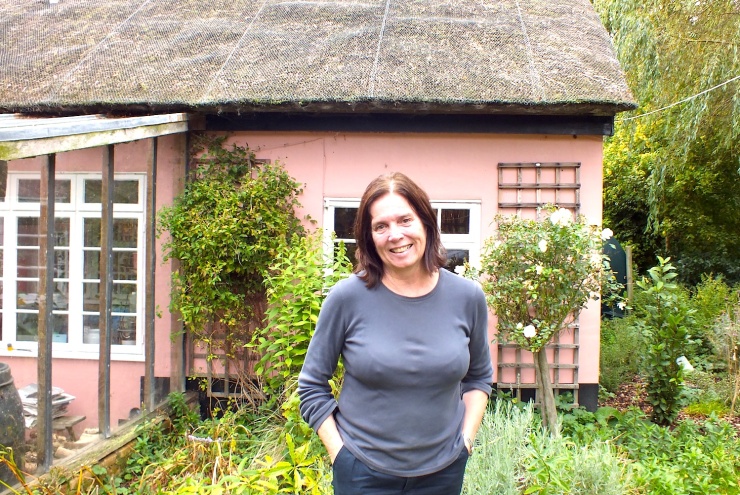 She speaks naturally about meeting Jarvis Cocker (“he’s always so sweet”) and Damon Albarn (“he gave me this bear hug almost crushed my back!”), plus the guys from Underworld and Rough Trade’s boss Geoff Travis, who sat with her during the long awards ceremony. They all wanted to know more about the Center, she says, lively. Although no promises are made, there is a palpable expectation that these people will be there when opportunity calls. After all, as Cocker remembered during his acceptance speech, they’re all in debited to John Peel.

The studio where Peel worked is hard-wired to the BBC, what allowed him to record from home with superb audio quality. The turntables (Peel used mostly vinyl, I wonder what would he be doing with all this crappy MP3s music journos are presented nowadays), the mics and the technical equipment are at the same state as when Peel left for a holiday in South America – there’s even a Rough Guide to South America. Many boxes, games, photos, books, magazines, gifts, awards, festival name tags and all kinds of stuff occupy all the parts of the room. Here also stands the pool table he set up for his kids to play when he was working home.

The records sure catch immediate attention. I can’t really recognize any of them and, although I know there will be familiar covers hidden in the many boxes, I don’t feel an urge to sit down and search it through. Tom helps: he finds a well-kept Mike Oldfield’s Tubular Bells laying around. There’s even the original press release inside the sleeve.

Tom remembers that Peel stated that this “is the most important record you are going to hear this year,” then played the whole record on a show right after receiving it from Richard Branson, then an enthusiastic music fan on the verge of creating a new label, Virgin. “Hadn’t he did that I think the whole Virgin empire would have been a still-birth. From Mike Oldfield we ended up signing the Sex Pistols, Rolling Stones, Genesis and Phil Collins,” Branson remembers.

There are sure much more stories like this to be told among the fantastic quantity of records around the Peel Acres. But someone is already doing that: with TheSpace website created an online series telling the story behind selected finds, one for each letter, in John Peel’s Record Archive.

As well as his albums, there are twenty-six videos with bands such as Absalom, Babes in Toyland, Cabaret Voltaire, Dick Dale, East of Eden and so on, making a deep journey inside the Peel’s music world. They are presented by Sheila and interviews with the likes of Andrew Weatherall and (Tom’s personal hypothetical choice for opening the Peel Centre) singer Nina Nastasia.

There are much and more memories regarding music in such a house. Sheila remembers when PJ Harvey came to record her first Peel Session and, as it was summer time, they kept the windows open and Sheila and the kids could see her performance while sitting outside. Or when Scottish indies Belle & Sebastian had to occupy two different rooms in order to fit the space. Mark E Smith, front man from one of bands most related to Peel’s history (they recorded no less than 24 Peel Sessions!) on the contrary, wasn’t ever invited – John preferred to record The Fall at the BBC studios because “Mark is such as unpredictable person”. 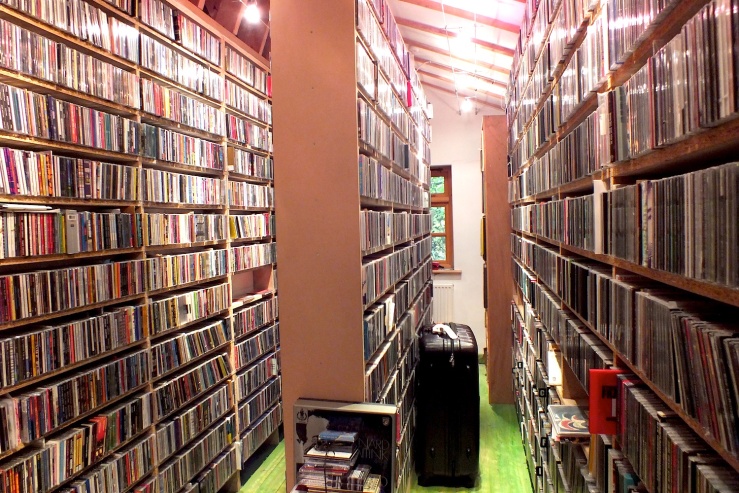 I ask Sheila about their family life while all this musicians came to play inside the house. “Oh, the kids had the time of their life, really. But they didn’t realize at the time”. All of then, of course, grew up to have fantastic taste in music. Tom Ravenscroft is now proudly following his father footsteps, presenting a new music show every Friday on BBC Radio 6.

TheSpace crew left record boxes all around the studio floor, but most of the records are stored in a separate room, near the kitchen. Another room guards the CDs. A metallic cabinet holds all the paper files John himself inscribed his whole life, cataloguing his collection numbered and in order of arrival. Nevertheless, she does not seem to ever care about dividing her home and husband with this heavy load of music.

The future of the record collection is to be determined by the offspring as well. There is interest from the British Library to store and keep the collection accessible for the public, but according to Sheila “the decision is up to the kids, really.”

I heard many of the Peel Sessions as a teenager in São Paulo: the four track vinyl’s with grey covers where considered very rare stuff, usually expensive, and I was the proudly owner of a X-Mal Deutschland one. Only later in life the radios shows where made available on the internet. Obviously, I never met him in person or had the chance to listen to the live broadcasts. But seems to me that some of his love for music and admirable capacity of keeping interested in fresh and young music came from this small woman with clear eyes and loads of energy.

Before leaving I stop at a cartoon on a corridor: it shows a room full of records and a long haired woman sitting on a sofa while a man enters the room holding a vinyl record.”Oh, nice, another record,” she says. It was a gift and a perfect picture of life with John Peel.
Then I ask what’s Sheila’s favourite band. “The Fall, maybe. But I really liked all the stuff John played.” She stops for a second and laughs: “It’s got to be dance music… Underworld! I always loved to dance!”

Peel left two good books unfinished. Both have the same ironic and brutally honest sense of humour that Peel had in life and were compiled and finalized by Sheila after John’s passing: Margrave of the Marshes (2005) and The Olivetti Chronicles (2008).

Peel kept a hundred of his favourite 45s inside a wooden box, under his table. When the now famous John Peel Record Box was opened it had a least 20 White Stripes singles. This and other curiosities are to be discovered on the Channel 4 documentary – available on YouTube