Remember when the NME used to be good…

In recent years there’s been an emergent number of dedicated music websites that do an excellent job of what the NME used to do years ago.
The magazine website has become vapid shell, recycling Daily Mail-like articles about well known acts.

But it didn’t used to be like that. Before the web New Musical Express was the leading publication for news about new and breaking artists. It was the newspaper version of what John Peel was doing on the radio.

Also years ago they used to give away free cassettes (and later CD’s) with tracks from new bands, or live or remixed versions of songs done by artists first covered by the magazine.

They didn’t give away all the cassettes though. The item featured below (released in 1997) was made in collaboration with Strange Fruit and was via mail order only. As you will see from the track list, this is virtually a greatest hits album.

The introductory text on the cassette reads:

“This is a selection of original recordings made for the John Peel Show on Radio One.
Strange Fruit Records and New Musical Express are grateful for the cooperation of the artistes, record companies, music publishers and of course to Peely and his producer John Walters.”

Because this is from a cassette and not one of my radio show compilation podcasts, it does not feature the voice of Peel himself, just the artists who performed. 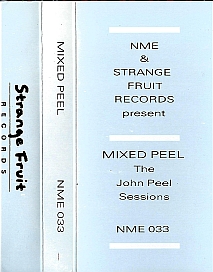