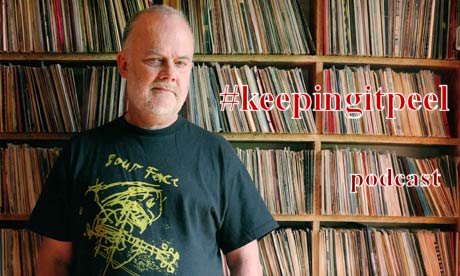 Long after the first one a couple of years ago, finally the sequel…

Before we get under way another mention for the Peel Wiki: http://peel.wikia.com. If it wasn’t for the wiki and the dedicated people who find and encode the old recordings, these posts would not be possible.

If you’ve got any old tapes stored away somewhere with your recordings of John Peel shows then get in touch or post a message to the John Peel discussion group. They will assist you in converting and uploading anything you have.

As with the previous edition, the research and source of this podcast comes from the Peel On Record Wikia page. The tracks are randomly selected and they are ones which I hope you’ll find of interest. The majority of tracks here namecheck John Peel or reference him in the song. I’ll add a note beneath to explain.

Another Nice Mix turns unexpected technical faults and human confusion into an “art event.” It was created from samples of The John Peel Show and Another Nice Mess (Marcelle van Hoof’s show on Radio DFM), with music by Oak and Krause Duo Nr. 2 and a pinch of Laurel and Hardy.

Includes the line ‘then they go to Rough Trade to buy Siouxsie & the Banshees / They heard John Peel play it just the other night’.

An instrumental track that has in the background a recording of Craig Scanlon of the Fall, on the phone to Peel with a match report of Manchester City v West Ham.

Released in 1995, meant to be tongue in cheek. Contains samples of Peel talking.

As a kid I kept on repeatedly playing this B side, because of the “ALBERT TATLOCK !” line. Peely in amongst the namechecks. Recorded live at the Marquee. Originally recorded as a Peel Session.

Includes a sample of Peel saying, ‘what do you think of the programme so far?’

“Another gig that I’ve been to in the recent past, and one of the very best that I’ve been to in my entire life, featured Matchatcha with the guitar player Diblo Dibala from Paris. I’m not a dancing man, to be perfectly honest with you, cos I haven’t really got the figure for it, but on this particular occasion I was dancing away like nobody’s business, and the high point of the entire magical evening came when he played a new song from the new LP, called O.K. Madame, and the song is called Matchatcha Wetu, and what is particularly significant about this, and this is egotistical of me, I admit it in advance, but if you listen very carefully to this record, one minute and fifteen seconds into it, Diblo goes “Andy Kershaw” (that’s the name of one of my colleagues at the radio station I work for in London), BBC, John Peela.” You have to listen very carefully to catch it, but believe me, to hear Diblo singing your name on stage is one of the greatest things that’s happened to me in my entire life.”

Based on the Kenny Rogers song

From a broadcast 9th June 1999, introduced by Peel

There’s still enough material to potentially do a third… Maybe sometime in the future.

What will YOU be doing to commemorate his life this October ?